I Acquired a Brain Injury

Now I need to make it clean that acquiring a brain injury is not like acquiring a new car or a boat or television.  You do not go down to the Brain Injury Store and ask for a new brain injury.  It just does not work that way.

March is Brain Injury Awareness month.  To help raise awareness I thought I would share about acquiring a brain injury.

Traumatic Brain Injury occurs when something outside the brain causes the injury.  Being hit on the head with a hammer, falling debris from an air plane hits you on the head, falling down and hitting your head, car accident where you smash against the side window or windshield.  These are all forms of TBI.  As long as the injury is from something external the injury is classified as TBI.

Please do not think that I am making light of brain injuries.  I suffered a brain injury.  Mine was the acquired kind.  I just think that the term Acquired Brain Injury or ABI is an odd way to phrase a life changing event.

ABI’s occur when the injury to the brain is not from an external source.  Even to a lay person like myself that makes sense; TBI external, ABI not external.

Brain injuries whether TBI or ABI can often be invisible to those observing the person suffering.  However, brain injuries are real and they can result in long term or even life long debilitating effects.

Just for the record, if I had a choice I would not have chosen to acquire a brain injury.  Acquiring a new car would have been a lot more fun.  As it was, I had no choice in the matter.

March is Brain Injury Awareness Month, be aware that those of us who have suffered a brain injury struggle to different degrees with many aspects of life that other take for granted.  Although our disability is invisible, it is still real.

I know that Thomas always ends his blogs with keep squeaking you wheels.  However, I have no wheels to squeak.  I will remind you that part of my brain died.  So what is your excuse?

I came across a New York Times article, which led me to a Huffington Post article,

which led me to a Tedx Talk video that blew my mind. It inspired my to do a large

(among other things). It has been a long time since any treatment for epilepsy or any

medical conditions for that matter has gotten me so excited or given me such hope.

One of the more cutting edge treatments gaining notoriety for treating seizures,

even the most severe seizures in children, is not what you might expect. It’s

medical cannabis. A specially derived extract from a plant that has been bred to

have no psychoactive effects, but more analgesic and anti-inflammatory qualities.

It has essential no tetrahydrocannabinol (THC), the psychoactive element found

in cannabis, and it has a high concentration of the non-psychoactive element

So far, there have been no reported negative side effects from taking medical

cannabis. Pharmaceutical treatments for seizures often cause one if not several of

cognitive processing problems, among other problems.

Children that were taking numerous pharmaceuticals and still having hundreds of

this cannabis extract. Not only are they seizure free, their cognitive and physical

development has rapidly improved as well. Research currently being conducted

indicates that this improvement my not only be a result of the lack of seizures, but

also due to a property of the medical cannabis.

The irony is that as far back as 1949, research conducted in the United States

showed that cannabis a good treatment for seizures. I am on a quest to learn more

about medical cannabis and its effect on seizures. What I have learned is just

the starting point for me. More research is being done every day internationally

to discover the medical properties and uses for medical cannabis. Luckily,

HIV/AIDS, Hepatitis C, and Crohn’s Disease. And these are just a few of the medical

conditions that we know of so far. Pass it on.

About a month ago, Thomas got an email inviting him to speak at the Ocala Rotary Club.

This was such an honor and Thomas accepted. He got there not knowing how many people or who he will see. When he arrived he saw his friend Betty Grey and her daughter. They do therapeutic horseback riding in Marion County.

Thomas was showed where he should sit and relax and do a last run through of his talk, while everyone came in. Thomas met the lady who invited him. The meeting started and some business was handled before they called up a lady who introduced Thomas with a little background on him. Everyone applauded and Thomas came up to speak.

Thomas had motivated, inspired and made everyone laugh. One thing Thomas shared was a story called The Race he found on YouTube (http://www.youtube.com/watch?v=jmfKlXMbTw4).

Thomas mentioned that he is the author of The Squeaky Wheelchair and that he is a motivational speaker who goes around speaking to different groups, businesses, charities, at conferences and events and more. Thomas Moon is available to speak at your next conference, event, business event, nonprofits, church, etc. Contact him at tj@moonscapes.org or by phone at 352-502-5994.

Thomas informs everyone today that it is time to step out of that freaking box they put themselves in and start moving forward. There is nothing that’s truly impossible if you set your mind to it. Looking at the word impossible, you will actually see two words that say, “I’m Possible.”

Get off that hinny of yours, step out of the box and keep squeaking your wheels until you conquer your goals and dreams!

Being Old, Disabled Or Vulnerable In Florida Can Be Hazardous To Your Health

You can abuse and neglect the disabled at an Assisted Living Facility in Florida – and you can still continue to run or work at the facility.  Yes, that is true.  There is no statute or administrative rule that prevents someone who has been held responsible for the abuse, neglect or even death of a resident of an ALF from being banned from running or working at an ALF.

Couple this with the fact that Governor Scott fired the head of the Long Term Ombudsman Council for being too aggressive in pursing complaints against  Florida Nursing Homes and other care facilities – and being disabled or aged in Florida can be dangerous to your health.

Rick Scott has formed a panel to look into the possibilities that care facilities for the aged and disabled may be harming our citizens.  Of course this is the same man who put the owner of a large chain of nursing homes in charge of the entity responsible to oversee and handle complaints from nursing homes.  The foxes are running the hen house.  We can expect no more from any commission that our Governor sets up.

The Miami Herald ran a series called Neglected to Death.  This investigated and documented numerous cases of abuse in our ALF’s and nursing homes.

This series ran in May and our vulnerable elderly and disabled are still without adequate protection.

However, like the Ombudsman Council they were too aggressive and found too many problems with facilities that provided care to the vulnerable in our state.  Two years ago the council was abolished.  We no longer have a third party organization, or any organization for that matter, concerned with Human Rights Violations.

Being old or vulnerable in Florida can be hazardous to your health.

Governor Scott step up and appoint a third party organization to review Human Rights Violations.  It needs to be an organization of volunteers who have no vested or monetary interest in Nursing Homes, ALF’s or other facilities.

Make Florida a safe place for our elderly, disabled and vulnerable citizens.

Previously posted on View From The Dark Side Of The Moon blog. 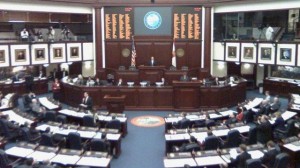 No more cuts. The disabled are already shouldering more than their share of budget cuts.

Cancer is the general name for a group of more than 100 diseases in which cells in a part of the body begin to grow out of control. Although there are many kinds of cancer, they all start because abnormal cells grow out of control. Untreated cancers can cause serious illness and even death.

I decided to start a team again this year for Relay For Life/American Cancer Society. Even though I have a disability, I still participate in community events like this and   more. YOU CAN TOO!

Here is a great song/video done by Martina McBride

To find out more about Relay For Life/American Cancer Society, click here.

I have family and friends who have cancer or are survivors. That is one reason I participate in Relay For Life and started Team Rocker Walkers. I would love to get your participation and the participation of others with disabilities.  Come out to Relay and show that even though you have a disability, we can participate in normal events and become productive members of!

I believe that everyone with a disability can do and should get out there in the world and Live Their Life.

Keep squeaking your wheels because one day you will be included and not looked down on!

From Aaron Nangle of WaiverProvider.com

The Legislature approved $810 million for APD’s Medicaid waiver for the 2011-12 state fiscal year that began on July 1. APD customers received $930 million worth of services last year.

The agency has been working to bring its waiver expenditures within the Legislative appropriation this fiscal year. The agency is also looking for opportunities to increase waiver flexibility and equity for customers, while continuing to protect their health and safety.

Earlier this month, APD shared five cost containment
initiatives with various legislative committees that would reduce APD’s waiver obligations. The director was asked to bring back a proposed timeline for implementing the changes.

The timeframes may be contingent on developing new rules or federal approval from the Centers for Medicare and Medicaid Services (CMS).

At today’s meeting, Hansen announced plans to standardize payment rates for intensive behavior residential habilitation beginning January 1, 2012. Also on that same date, the agency will begin collecting fees from APD customers who have income to offset some of their costs of living in a group home.

APD plans to reduce the rates it pays for therapy assessments and all nursing services to the standard rate paid by the Medicaid State Plan beginning April 1, 2012.  Currently, the APD Medicaid waiver pays higher rates for most of these services.

Also on the same date, APD will reduce the difference it pays between solo providers and agencies for waiver services to no more than 20 percent. Currently, those rates may differ up to 43 percent.

There was no timeline announced today for implementing cost sharing for parents who have children on the Medicaid waiver. APD is working with the Agency for Health Care Administration on this issue.

The change to the waiver requires federal approval.

After pursuing these cost-containment initiatives to APD’s Medicaid waiver, the agency expects to realize more than $14 million in reduced expenditures on an annual basis.

Keep raising your voices and squeaking your wheels.  We can not let those who are them most vulnerable suffer from these cuts.