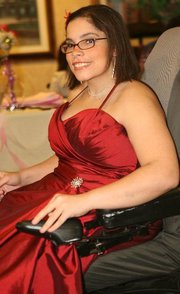 Laura-Lee Minutello was born with cerebral palsy. Her classmates probably never consider her beauty queen material.  She probably never thought of herself as beauty pageant material.

Now she is the runner-up for Miss Wheelchair Florida.  She was a reluctant advocate who did not want to be noticed or to stand out.

Now she is both an advocate and role model.  Congratulations for Laura-Lee we need more persons with disabilities to stand up and be heard.  She now has a platform to speak from and has not been shy about doing that.

Keep wheeling along and squeak those wheels when you have to.  You are beautiful.

I left off waiting for the train on my way to North Carolina. I finally got on train and went to get in the seat and found out the aisle was not big enough for my wheelchair. The train attendants let me sit in the last row.

I had to get out off my chair and walk a little bit to get into my seat. I almost fell but people around me went to help me which was great. I got settled in as the train started to move.  It was a bumpy and rocky ride, but I did sleep for a little.

The train made many stops on its way to Raleigh NC. We left Jacksonville at 11 pm and got to Raleigh at 8 am in the morning. I would have liked to see the dining car but since my chair would not make it down the aisles I was seat bound for the trip.

We met my aunt at the train where she drove us to my grandpa’s house in Garner.

I was sleepy since I did not really sleep a lot on the train. We arrived at my grandpa’s house where I had to climb the steps to get inside.  Unfortunately his house in North Carolina is not accessible.

My legs sure got a workout! We sat and talked in the house until dinner. We had salad and a delicious pasta dish.

We visited my aunt who lives next door.  More stairs to climb.

I eventually got to bed around 10 pm, very tired from the steps and the long train ride.

Don’t let those nasty steps stop you because you have the power to move mountains!!!

Stay tuned to hear about the next part of my adventure.

Category: Being Disabled, Disabilities, Growing Up Disabled, Living With A Disability

Change to APD’s Respite Services & the Creation of Respite Pool.

New changes regarding APD’s respite services. There will be cost plan changes for your people that receive respite services. CDC+ consultants, this will mean a new purchasing plan with the new monthly budget effective October 1, 2011 will need to be submitted to your local APD office. As additional details are shared with us, we will provide them to you.

Effective 9-1-11, respite in cost plans will be  reduced by 50% the remaining cost plan approved amount less the amount used in July and August.

Have you ever thought about disabled parking spaces?

I was at Ocala Housing Authority and the bank today and got my eyes opened. Why are the disabled spaces sometimes further away than other parking spaces? I thought one of the reasons for disabled spaces was to make it simpler and easier for people with disabilities because most have a tough time walking or wheeling distances.

I was also at the Ocala Housing Authority and right up front where the disabled parking but on the first space was a sign that said, “Reserved For Director.” This is so wrong and ridiculous, why does the director get the first space.  This makes harder for the people who need it. The director did not even have a disability.

The next time I see a reserved spaced, I am going to park there. Let them try something, it will be a waste of their time.

Some great information for parents or anyone with a school age child with a disability in their life.  PEAK’s Back-to-School 2011 E-Newsletter

A disabled child in Georgia was repeatedly sprayed with Lysol for passing gas in school.  Now for a lot of middle school children this might be a good joke or gag.  However, this was a child Downs Syndrome.  This young child is unable to communicate verbally.

The teacher is accused of doing this has been accused of other abusive practices for a three year period between 2004 and 2007.

Why is this just now making the news?  It seems the Fulton County School System had been withholding complaints against this teacher.  These complaints and incidents were made public just recently.

The report that is only now being released includes statements from other teachers, school nurses and support staff alleging abuse.  The principal failed to report any of these incidents to the Division of Family and Children Services as is required by law in Georgia.

Among the allegations reported by other school personnel over the three year period are that the teacher; hit, kicked, stepped on, restrained, isolated and neglected students. In one case, she allegedly threw a camera at a child’s head which caused swelling and bruising.

This continued for three years.  The principal knew it was happening and continued to cover it up.  Only recently were the teacher and principal removed.  It is too little to late. Neither has been charged with any criminal act.  Both were allowed to resign so they keep their pension and benefits.

Talk about a cover up.  Pull the covers from over your head Georgia.

Parents of the “normal” children may think this is an isolated incident.  It is not.  This happens in all states and happens often.
Children with disabilities are being abused and neglected on a regular basis by public schools across this country.  They have no voice.  Those of us who speak out for them are too few and our voices are often ignored.

I will keep shouting into the wind if I have to.  I know that the squeaky wheelchair will eventually be heard.

Stop Abuse of Students In Schools

TASH is organizing another campaign against restraint, seclusion and the abuse of disabled students enrolled in public schools. If you are interested in signing the document, please provide me with your email address, and title the email TASH. The more signatures we have, the louder our children’s voices become.
Together we can end legalized abuse!  Go To Cause.

Starting this week I will be talking about health issues, exercise and other related issues as they apply to the disabled and myself.

A majority of Americans have lost focus and been going downhill with their health. This needs to change if people want to live a better life! Some thing’s people with disabilities and people without, can do is work out at the gym, take protein shakes, eat healthier, no more fast food. You can also try something called NatraBurst/One24 which will help with so many health issues and even financial problems (www.tjmoon.124online.com).

I was at the gym today where I worked my muscles to the extreme! I worked on my cardio, legs, abs, biceps and more. I went around in my wheelchair just minding my own business and to my surprise; people came up to me and told me how motivated they were seeing me come to the gym. They were so nice and it felt like I was treated like any other person at the gym working out.

A funny thing is that I had one of those people talk to me about how and what I ate. They wanted to bring me food once a week to help me out. I found that hilarious because people for some reason always want to give me things.

You can do work out and take care of yourself even if you have a disability. Do not let your lack of ability stop you. You can be healthier and exercise may help you to do more.

You can’t let anything stop you, improve your health, get buffer – it is an extraordinary feeling!