A Life Event That Burned

On November 8, 2012, I was cooking me some lunch in the microwave, good ol’ manicotti, and I was taking the food out of microwave to sit on lap to move to the table to eat, when it slipped out of my hands into my lap. I almost screamed. I fought hard to get my pants off while shaking like crazy.

I called 911 and the ambulance took me to Shands Hospital, the ambulance guys, nurses and doctors were so nice and I gained a new respect for them. (I was told that I was one of the best patients they had in a while). They said I would be ok and that my burns would heal in two weeks.

This event made me look at my life and see that I have become lazy/set in my ways. I needed to really change because my house was becoming so dirty and so bad that I could not invite anyone in. I had some things rearranged to make it more accessible for me and moved the microwave to the table from the counter.

The message for you is don’t burn yourself LOL and make sure you are keeping a healthy and safe life. I know cleaning may be a little tough and takes time, but it needs to be done so do it!

Please share below any comments or stories you have of being burned.

Squeak not only for change but squeak at yourself!

Wearing my leather jacket, burgundy shirt and black pants, I jumped in the Tardis. I decided to take a trip through time to November 2, 2012, where there was the Hurricane Who Convention going on (All about Doctor Who)

After settling in, I headed down to the convention hall where the dealer’s room was open. There was some awesome stuff including a tardis, a few weeping angels and many people were taking pictures of each other wearing their costumes of different Doctor Who characters. People asked to take my pic/a pic with me and it was so cool. The convention was comprised of different sessions and a masquerade party. 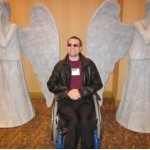 Fantastic!
I was so lonely and was looking for a companion to travel in the tardis with me and look who I found (Rose)

People did not care that I was in a wheelchair or that I had a disability. Everyone treated me the same as everyone else, asked to take a picture, talked to me and had a blast. I had so must fun and I learned that if people really wanted to, they could care more about what’s on the inside than what’s on the outside. Instead that is not the case today and people treat people who are different, like they don’t deserve to breathe the same air as them. (BTW it is bigger on the inside than it is on the outside).
Well, I told you how much fun the convention was and hear are a few pictures for you to see.
There was even the cutest little whovian at the convention
This lady with the tardis on wheels won the masquerade costume contest
Don’t blink

The doctor scanning for weeping angels
The universe will explode because two doctors are together at the same time
Remember that there is more in this world then to worry about others, money, and other things that ruin this world. Begin to make this world a better place, kind of like The Doctor does, Squeak, Squeak!