Tag Archive for left behind

Left Behind Children and Adults with Disabilities Who Have No Services

Mike Coonan is the President of Left Behind in the USA.  He fights a very tough battle to help children and adults with disabilities receive the services necessary for them to live a full and rewarding life.

Unfortunately he fights a battle that may never end and that he may never win.  However, despite this, he continues to fight on.

Currently nearly 400,000 disabled Americans live marginalized lives because they do not receive services that would help them live on their own, work or get out into the community.

His organizations opening statement is:

Keep fighting the fight and keep providing a voice for those who have no voice.  You are not alone.

Keep squeaking your wheels – they will have to pay attention.

From Aaron Nangle of WaiverProvider.com

The Legislature approved $810 million for APD’s Medicaid waiver for the 2011-12 state fiscal year that began on July 1. APD customers received $930 million worth of services last year.

The agency has been working to bring its waiver expenditures within the Legislative appropriation this fiscal year. The agency is also looking for opportunities to increase waiver flexibility and equity for customers, while continuing to protect their health and safety.

Earlier this month, APD shared five cost containment
initiatives with various legislative committees that would reduce APD’s waiver obligations. The director was asked to bring back a proposed timeline for implementing the changes.

The timeframes may be contingent on developing new rules or federal approval from the Centers for Medicare and Medicaid Services (CMS).

At today’s meeting, Hansen announced plans to standardize payment rates for intensive behavior residential habilitation beginning January 1, 2012. Also on that same date, the agency will begin collecting fees from APD customers who have income to offset some of their costs of living in a group home.

APD plans to reduce the rates it pays for therapy assessments and all nursing services to the standard rate paid by the Medicaid State Plan beginning April 1, 2012.  Currently, the APD Medicaid waiver pays higher rates for most of these services.

Also on the same date, APD will reduce the difference it pays between solo providers and agencies for waiver services to no more than 20 percent. Currently, those rates may differ up to 43 percent.

There was no timeline announced today for implementing cost sharing for parents who have children on the Medicaid waiver. APD is working with the Agency for Health Care Administration on this issue.

The change to the waiver requires federal approval.

After pursuing these cost-containment initiatives to APD’s Medicaid waiver, the agency expects to realize more than $14 million in reduced expenditures on an annual basis.

Keep raising your voices and squeaking your wheels.  We can not let those who are them most vulnerable suffer from these cuts.

Left Behind – The Disabled Without Services 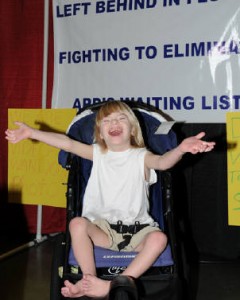 Mike Coonan runs an organization called Left Behind in the USA.  He speaks for the millions of disabled who have no services – those who have been left behind by our government.

Here is a link to a video on what it is like to wait for services.   Video

Mike spends a lot of time and effort advocating for the disabled.  Mike we all appreciate your efforts.

One day we hope that no one will  – Be Left Behind

Like Mike we keep making noise and squeaking our wheels to bring awareness of those with disabilities.