ATLANTA (CN) – Parents claim two special education teachers assaulted and battered their disabled son so badly he died from the abuse.
Ronald and Arthalia Hatcher sued the Fulton County School District, the Fulton County School Board, Fulton County Superintendent Robert Avossa, special education teachers Melanie Pickens and Katherine Dorn Durden, and 15 other Fulton County public school employees, in Fulton County State Court.
The Hatchers say their son Aaron, a special-needs student, suffered abuse at the hands of his public schoolteachers, Pickens and Durden.
“Aaron suffered from cerebral palsy, muscular dystrophy and other disabilities,” the complaint states. “As a result of his disabilities, Aaron could not walk or talk, and had other serious developmental issues and was unable to care for himself and required constant care and supervision.”
The Hatchers say they enrolled Aaron in public school to give him “as normal a life as possible.”
But they say instead of caring for him, Aaron’s middle school and high school teachers abused him physically and emotionally.
They claim Pickens confined Aaron in isolated places, physically restrained him and screamed at and berated him to punish him for “expressing himself,” and that Durden placed a homemade neck brace around his neck to restrain him.
“Unfortunately, the Hatchers’ trust was misplaced,” the complaint states. “Unbeknownst to plaintiffs, Aaron began suffering abuse within Fulton County schools as far back as 2004. From 2004 to 2007, Aaron was a student at Hopewell Middle school, where he was in defendant Melanie Pickens’ classroom.
“Ms. Pickens abused Aaron and other special needs students in her classroom physically, verbally and emotionally. Ms. Pickens’ conduct was investigated and her treatment of students was known to the school board. Nevertheless, plaintiffs were not made aware by the Fulton County School District of the abuse suffered by their son.
“Unfortunately, escaping Hopewell Middle School did not mean Aaron’s abuse would end. Aaron suffered still more abuse at the hands of his special education teacher at Roswell High School, defendant Katherine Dorn Durden. It was while Aaron was in Mrs. Durden’s class that the plaintiffs first became aware that Aaron had been mistreated at Hopewell Middle School.
“While in Mrs. Durden’s class, Aaron came home with bruises on his back and hands, making it clear that he was not being properly secured in his chair. Further, and without parental or medical consent, Mrs. Durden took it upon herself to twist and then constrain Aaron’s neck in a makeshift neck brace apparently because she did not like the way Aaron was forced to twist his neck in order to breathe. While a student in Mrs. Durden’s class, Aaron was repeatedly rushed to the hospital from school as a result of the abuse.
“Plaintiffs repeatedly sent messages to the school about Mrs. Durden. They requested that Aaron be moved into a different special education class and had meetings with the principal, all to no avail.
“Tragically, Aaron died on March 19, 2011 following the abuse he suffered at Roswell High School. Further compounding this tragedy, plaintiffs only found out about the earlier abuse by Ms. Pickens after Aaron’s death, despite the fact that the Fulton County School District had previously completed their own internal investigation which confirmed the acts of abuse against Aaron in middle school. Had they known, as school board personnel knew, that their extremely fragile son had suffered such abuse within a Fulton County school’s special education class, they would never have allowed him to enter Roswell High School, and Aaron might still be alive today. The teachers, paraprofessionals, medical personnel, administrators, and board members of the Fulton County School District repeatedly failed Aaron Hatcher and his parents, and the Hatchers have paid the ultimate price.”
The Hatchers claim: “Defendants knew or should have known that defendant Melanie Pickens had no training or other credentials equipping her to teach students with severe special needs and that she was routinely and systematically abusing the children in her classroom,” but failed to act.
They add: “It is nearly impossible to put into words the utter and complete terror Aaron must have felt as he was screamed at, isolated, and berated by defendant Melanie Pickens or how terrified he must have been when defendant Katherine Dorn Durden repeatedly cut off his airway with her homemade neck brace.”
The Hatchers seek compensatory and punitive damages for assault and battery, false imprisonment, intentional infliction of emotional distress, negligence, negligent hiring and retention, constitutional violations, and violations of the Americans with Disabilities Act, the Individuals with Disabilities Education Act, the Rehabilitation Act, and Georgia laws.
They are represented by Jarrod Oxendine, with Oxendine and Sauls.

From Georgia:Families Against Restraint And Seclusion

Students Traumatized in Special Education Across America, Seclusion, Restraint, and Aversives Scream Rooms when will America say enough is enough?
Published on January 18, 2012 by Kymberly Grosso in Autism in Real Life

A urine soaked scream room. A child stuffed in a duffel bag. Vinegar soaked cotton balls put in a child’s mouth. Slapped on the head with plastic bottles. Child dragged through a playground across asphalt with pants down. Shoved to the floor and dead from asphyxiation. Handcuffed and duct-taped. Degraded. Dehumanized. Traumatized. Mob stories? No, it is just a scratch of the surface of what has happened to children in special education in the past year. Not in a third world country, but here in America.

Anyone who deals with the disabled knows that there is more to them than meets the eye.  They amaze us everyday and continue to amaze us with their insights and actions.

This is a great video that reminds us to never give up and to keep advocating for those who have special needs or are different.

If it keeps costing our schools (and taxpayers) millions, maybe the abuse of seclusion and restraint will end in our public schools.

This from Bedford VA, provided by Georgia:Families Against Restraint And Seclusion

Bedford County’s school board and several current and former school employees are facing a $20 million lawsuit.

According to the lawsuit, a 14-year-old autistic boy was attacked on his school bus by people who were supposed to protect him.

The alleged incidents happened more than two years ago. Attorneys for the boy’s family have produced video tape that they say shows some of the attacks.

The child is an autistic boy.

We need to keep squeaking our wheels.  Wake up our children are being abused in school.  School is not supposed to hurt.

Disabled Left Behind in Florida

Guest blog by Mike Coonan, President Left Behind in the USA

In Florida, 21,000 people (mostly children) with a developmental disability, such as mental retardation, autism, cerebral palsy and related conditions are living at home and are waiting for the Medicaid Waiver services.  They have been on the waiting list for the last eight years. Across America, more than 370,000 people (mostly children) with the same conditions are also lingering on similar waiting lists. We are told by our state elected officials that there is no end in sight for ending the Medicaid Waiver waiting lists.

At the same time, many families receiving Medicaid waiver services tell us that they are willing to share these precious resources.  Those of us on the waiting list are thankful for their thoughtful consideration of our plight. Their gracious words of support have encouraged us to work towards a more equitable situation.

Our expectation is that the Sharing the Blessings program will benefit thousands of families who are presently not receiving any help.  In addition, we firmly believe our program will shine a little light of hope in a bleak world for the families lingering on waiting lists.

Keep squeaking your wheels – One day they will listen to us.

More Abuse of Students With Disabilities In Florida Schools 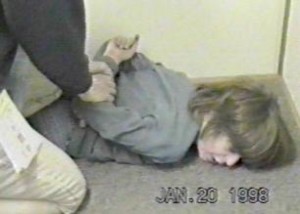 Child In Florida School Being Restrained

From St Lucie County in Florida comes another story of inappropriate use of seclusion and restraint.  Children with disabilities can be secluded and physically restrained in Florida public schools.  This abuse of our children needs to stop.

A First grader was handcuffed and taken to a mental health facility.  This is a First grader a child who is 7 or maybe 8 years old.

His hands were handcuffed behind him by the Sherriff and he was taken to the local mental health facility where he was baker acted.

The child was restrained after and incident with another student.

Realize that restraints can only be used if the child is a threat to self or others.  The child has to pose a serious threat of bodily harm.  How does a 7 or 8 year old who weighs less than 60 pounds create a life threatening incident?

The facts are still unclear.  The parents are having a hard time finding what exactly happened.  This despite the fact that new Florida legislation requires the school to file a detailed report with the State for all restraint incidents.  Parents are also required to be notified.
A representative for the school district declined issued this statement: “The school district and school staff are continuing to work with the family for the best educational opportunity for the child and in his best interest.”

Translate that into – the school does not want to be sued but will really not do anything to help educate this child.

We need to stop abusing our children in our public schools.  School is not supposed to hurt.

Keep squeaking those wheels. Do not put up with abuse of our children.

Think Autism is trying to set a Guinness World Record™.  The date is October 1st at Steinbrenner Field in Tampa, Florida.

They will be assembling or attempting to assemble over over 2,336 kickboxers.  That is the current record set in 2009.

Tae Bo Fitness® creator Billy Blanks® will be putting the event together.  Of course they will be raising funds for and promoting awareness of autism.

This will be a fun time and a good way to show support for the autism community.

Remember the squeaky wheelchair can kick some butt.